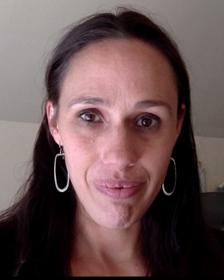 After seven years as a lecturer in the College of Social Sciences, Soma de Bourbon has joined the Department of Sociology & Interdisciplinary Social Sciences as an assistant professor.

De Bourbon, who received her B.A. in Native American Studies from the University of California, Berkeley, and her Ph.D. in the History of Consciousness Program at UC Santa Cruz, has taught classes in women’s studies and Asian-American studies, as well as sociology, and is known for engaging her students in hands-on projects on campus.

Her students have strung up hundreds of shirts across campus, each garment representing a victim of violence, and hung red dresses, each representing a missing or murdered indigenous woman.

De Bourbon, whose ancestry is Blackfeet Indian and French, is also the faculty advisor to the Native American Student Association on campus. “I love the school and I love the students,” says de Bourbon, who is teaching courses on masculinity and femininity and family violence this semester.

De Bourbon was raised in an unstable and violent household and left home when she was 12, finding a job, renting a room and passing the California high school proficiency exam so she could enroll in community college classes.

It was an unconventional start to a career in academia. While at Berkeley and while pursuing her Ph.D., de Bourbon worked full time, in shipping and packaging, waitressing, managing an office and most frequently as a nanny to wealthy families.

“My parents were pretty much drug addicts, and I’ve had every kind of family violence you can think of,” says de Bourbon. “The only gift I would say that my parents gave me would be the gift of understanding suffering. And I have a high ability to understand the suffering of my students.”

Her research has centered on the ways in which Native people are viewed as property by whites, through enslavement and detention, lack of enforcement of the Indian Child Welfare Act and cultural appropriation.