The Muwekma Ohlone Are Still Here

The river has been a major Muwekma ancestral heritage site for approximately 2,000 years in downtown San José along San Carlos Street and Almaden Boulevard, which the tribal leadership has had oversight on since 2012. As part of the tribe’s reclamation process, the Muwekma Language Committee renamed the site Thámien Rúmmeytak, which translates as “Place of the Thámien River Site” (Leventhal et al 2015, DiGiuseppe et al 2021).

“The Ohlone land is unceded,” said retired San José State Anthropology Lecturer Alan Leventhal, who has served as the tribe’s ethnohistorian for more than 40 years. “They never lost the title to it; it was stolen. This history and heritage continues to be obfuscated by the dominant society, a colonial system that seeks to eradicate the existence of Indigenous populations in their presence.”

Salazar’s 2021 mural, “We Are Muwekma Ohlone,” portrays the face of Muwekma Ohlone Chairwoman Charlene Nijmeh adorned in a warrior eagle headpiece with a basket-weave pattern and a hummingbird warrior face mask, a tribute to the tribe’s creation story. The clouds painted above her are accompanied by images of tribal elders while roots extend below her, connecting her to the next generation.

“The mural recognizes the Muwekma Ohlone tribe, the Indigenous people who once lived along the Guadalupe River that flows through downtown San José,” wrote Salazar in his artist statement. “My initial draft was inspired by one of their creation stories that the tribe shared over many lifetimes, featuring the coyote, the eagle and the hummingbird.”

This is the third mural commissioned as part of POW! WOW! San José’s artist-in-residence program. POW! WOW! San José, established in 2017, is led locally by the Empire Seven Studios collective. The team, which consists of Ahn, Araujo and Stacey Kellogg, partnered with the Guadalupe River Park Conservancy to shift from a weeklong festival to an artist-in-residence program due to the COVID-19 pandemic.

They invited Salazar, a retired United States postal worker who painted his first mural on El Tarasco, a Mexican restaurant near San José’s Japantown 35 years earlier, to create a piece of artwork along the river. The mural was later lost amidst new development in the neighborhood.

“Alfonso wanted to make sure that this was a contemporary depiction versus portraying the tribe in the past tense,” said Ahn.

“Even in our modern society, there is a lack of knowledge and information of Indigenous culture. The Guadalupe River, also known as the Thámien Rúmmey, is an underappreciated lifeline for the entire city. Adding public art to the trail is only part of the solution — there is environmental, social and spiritual healing that we felt was needed.”

She added that it was especially important to involve the Muwekma Ohlone Tribal Council because, as the first inhabitants of this land, they could provide much-needed historical, environmental and cultural insight. According to Leventhal, the Muwekma Ohlone have inhabited the region for around 10,000 years, based on the dating of an archeological site located along Highway 101 and Metcalf Road. The POW! WOW! San José team connected Salazar to Chairwoman Nijmeh and tribal elders to gather their feedback and ideas.

“It was an honor to be a part of this mural,” said Chairwoman Nijmeh. “I was a little shy about having my face at the forefront, but I see it as serving my people, and that’s my job as the Chairperson: To make sure that we are represented. These images in the mural, of our ancestors, remind us that because of their resilience and because of their strength, to persevere through trauma, we are still here today. We are still here. That’s the main point. And the images of our children in the mural remind us that we are teaching children to become the next leaders who will carry on.”

The Chairwoman added that she was moved by Salazar’s passion and advocacy. She appreciated his efforts to include the tribe’s past, present and future in the mural.

The story of the river is not unlike the story of the Muwekma Ohlone: Revised, renamed and sometimes rewritten by anthropologists and government officials.

Despite maintaining an active presence in the San Francisco Bay Area, the Muwekma Ohlone, previously called “Costanoan” by anthropologists, were deemed “culturally extinct” in 1925 [pdf] by then-celebrated UC Berkeley anthropologist Alfred Kroeber (Monica V. Arellano, Alan Leventhal, Rosemary Cambra, Sheila Guzman Schmidt, and Gloria Arellano Gomez, 2014). As Leventhal et al. argued, they weren’t simply denied rights. In the eyes of the government, they had been erased by anthropologists and officials at the Bureau of Indian Affairs (BIA).

And yet, the tribe hadn’t gone anywhere. Between 1996-2002, the Muwekma Ohlone rallied to petition the BIA and federal courts to reevaluate their status. They demonstrated three facts: First, they shared their aboriginal descent from the three Bay Area missions back to their villages during the late 18th and early 19th centuries. Second, they demonstrated proof that they were federally recognized as the Verona Band of Alameda County, and third, they were never legally terminated by any act of Congress.

“Kroeber was considered the quintessential authority on California Indians and the tribe,” said Leventhal. “He interviewed tribal elders and determined that the individuals who had survived were once attached to Mission San José, Mission San Juan Bautista and Mission San Carlos, but they lived lost among other Indians and ‘obscure Mexicans.’ So while this history is known and published, it is not easily accessible and not widely taught.”

In effect, the anthropologist’s declaration of the Muwekma Ohlone’s extinction, despite his evidence to the contrary, created roadblocks for Native and Indigenous communities across the state. Since the government insisted that their tribes did not exist, that made it especially difficult for tribal members to petition for civil rights, access ancestral lands and economic resources.

Despite having federal recognition in 1914, the Muwekma Ohlone were stripped of their rights in 1927, when Sacramento Superintendent L.A. Dorrington unilaterally removed 135 bands and tribes from the list of tribes eligible for federal land without a needs assessment or visitation. Dorrinigton was later investigated for dereliction of duty.

Meanwhile, six Muwekma men enlisted in the Army, Navy and Marine Corps to serve in France during World War I, added Leventhal — an era when they were still not considered American citizens. Four of them are buried in the Golden Gate National cemetery. During WWII, almost all of these men served overseas in both the Pacific and European theatres, including in the 101st and 82 Airborne Divisions.

Ever since the Muwekma Ohlone lost their eligibility to obtain a land base under the Congressional Appropriation Acts of 1906 and later years, generations of community members have dedicated time, energy and resources to pursuing recognition in court. Leventhal added that the Muwekma families and children enrolled with the Bureau of Indian Affairs in 1928-32, 1948-55 and 1968-71 were sent to Indian boarding schools in the 1930s and ’40s.

A vision for the future

In more recent years, tribal leaders have partnered with city and county governments and San José State faculty in archeological and anthropological research. Salazar’s mural represents just one way in which the Muwekma have never left their ancestral home. 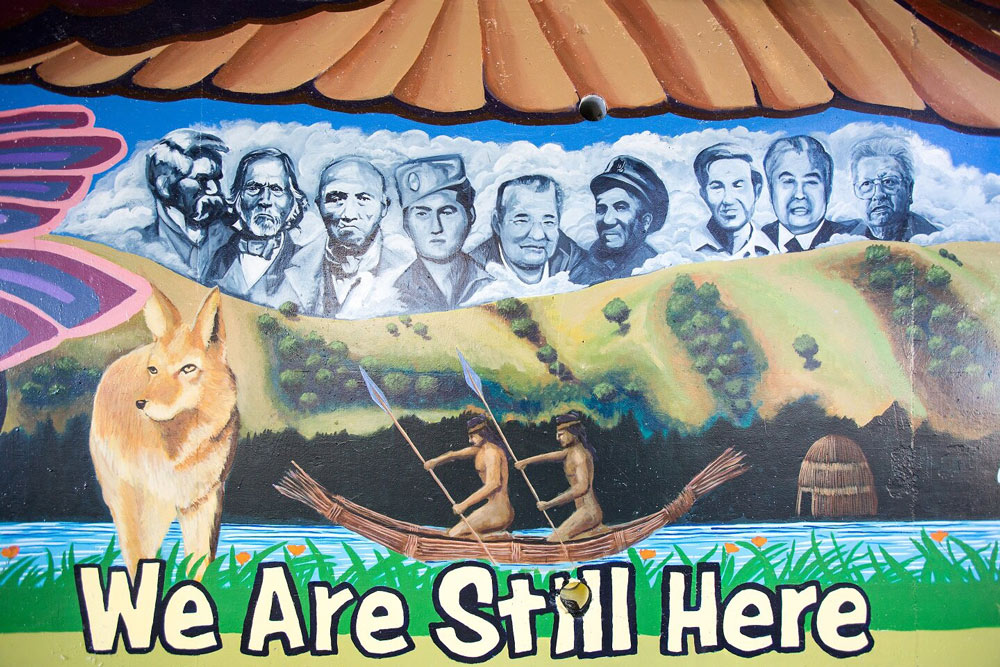 “This mural acknowledges the people who were here before us, and who are often excluded from narratives,” said Jennifer Gonzalez-Arias, ’17 English and Journalism, a cinematographer who captured Salazar’s artistic process along the Guadalupe River. “San José State, as a university on their land, can propel the tribe, give them a platform, and tell their story to help them get federal recognition again.”

“There is a history way before the history of San José State, and that is with the Muwekma Ohlone tribe. The university has a moral obligation to recognize the people, the stories and the culture of the tribe.”

Mary Papazian, the university president, agrees. Before leading public meetings or presentations, she and other campus leaders now read SJSU’s land acknowledgement to honor the land that the university inhabits.

“Lasting change can only happen with a deep and authentic understanding of the root problems,” Papazian said. “To that end, San José State University has made a concerted effort to listen to populations and voices that may have felt marginalized or ignored in the past. We know that the path to becoming an anti-racist, multicultural campus must include broad and diverse input from our campus communities, particularly those groups and individuals who have been most adversely impacted by systemic racism, as well as those who were here long before us. This includes the Muwekma Ohlone Tribe.”

“We recognize the importance of this land to the Indigenous Muwekma Ohlone people of this region, and consistent with our principles of community and diversity, we strive to be good stewards on behalf of the tribe, whose land we occupy.”

This fall, Papazian also made a commitment to open an Indigenous and Native American student success center on campus.

“San José State is part of a community that extends beyond the four corners of Washington Square,” she said. “As we think about our impact on surrounding communities, we must become a resource for how to think differently. This is long overdue.”

The Guadalupe River parkway spans 11 miles from Alviso, the southernmost part of the San Francisco Bay, as far north as Los Gatos, and has historically served as an artery for San José wildlife. Three miles of the parkway between the Mineta International Airport and Diridon Station make up the Guadalupe River Park.

Su and fellow SJSU Urban Planning Lecturer Rick Kos worked with a cohort of urban planning graduate students in fall 2020 to survey residents who used the river trail. The resulting findings, published in partnership with CommUniverCity, the GRPC and the San Francisco Bay Area Planning and Urban Research Association (SPUR), included recommendations to connect people to the park through art, such as “hiring local artists through organizations like POW! WOW! San José to create public art works to bolster the park’s identity.”

“The vision that we have for the Guadalupe River Park is less about specific designs, but more so about what people can do, and what they can feel, when they are in this space,” added Su.

Ahn, who has lived in San José since 1987, admitted that she’d never traversed the parkway until she and her team began exploring ways to enhance the existing public art collection within the Conservancy by adding dozens of art installations along the trail.

“The artist-in-residence program became a deconstructed model of the art festival,” said Ahn. “Our long-term goal is to help create San José’s longest public art corridor to encourage trail park usage and activities to promote health and wellness, both physically and mentally.”

This vision is apt during a global health pandemic that has disproportionately affected communities of color, with many Indigenous and Native communities concerned about underreported data. By making the Muwekma Ohlone front and center of POW! WOW! San José’s latest mural and engaging with local tribes, Salazar is sharing an important message: The Muwekma Ohlone are still here.

“Take a walk, ride your bike, or go for a run along this trail,” Salazar wrote. “When you get to the underpass of W. San Fernando Street, look along the wall. There you will see a mural about the people whose ancestors were once living here along the river. Learn about their story. Learn about what happened to them. Learn about our history here before the place was called San José, California.”