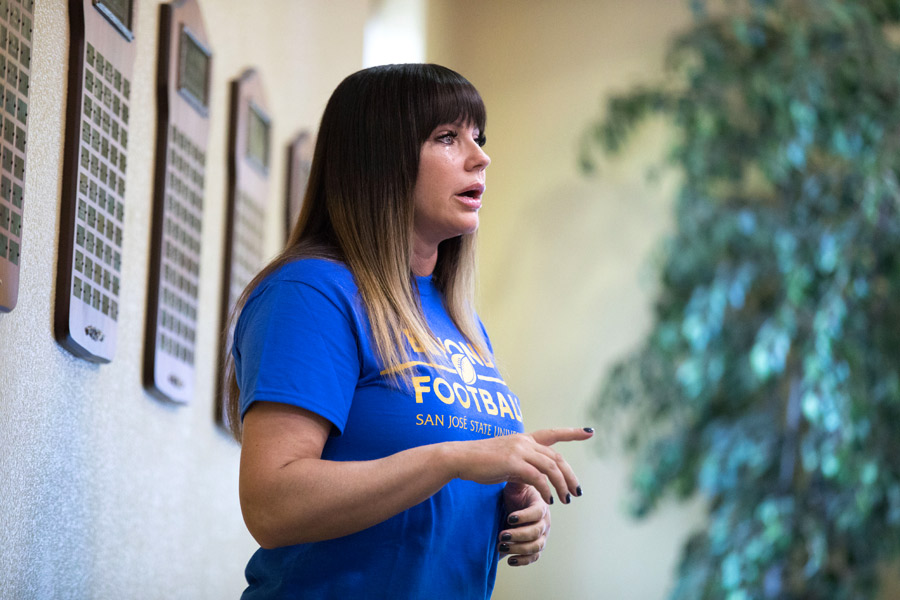 As painful as it is to recall—and in some ways, relive—her personal trauma, when Brenda Tracy began sharing her story with college football teams and coaches across the nation, she discovered opportunities to encourage a proactive dialogue about sexual violence. Though she struggled in silence for nearly 20 years while working as a nurse and raising two sons, Tracy’s decision to go public with her story in 2014 transformed the way she viewed sexual assault, collegiate sports and ultimately gender politics on college campuses and beyond.

What started as an effort to educate evolved into the Set the Expectation campaign, in which she works with coaches and educators to set an expectation of accountability and respect on the field and off. She created a Set the Expectation pledge that student-athletes can sign to show their solidarity with survivors of violence and demonstrate their commitment to the movement. In 2017, Brenda Tracy traveled to Indianapolis to present a petition to the NCAA requesting that the organization ban violent athletes from participating in college sports. That same day, the NCAA’s Board of Governors voted to convene the Commission to Combat Sexual Violence—a huge step toward changing the conversation about sexual violence in sport.

Tracy’s visit to San Jose State’s football and basketball teams on March 13 coincides with the Words to Action: Gender, Sport and Society, a town hall hosted by the Institute for the Study of Sport, Society and Social Change.

What did you hope to accomplish by meeting with SJSU’s basketball and football teams?

Number one, I try to humanize this issue and make it personal for them, which is why I share my story in very graphic detail. And the other goal is gaining buy-in, inspiring them to want to get involved. If that means they want to sign the Set the Expectation pledge, great. If that means they want to attend Take Back the Night, then that’s fine. I want them to recognize their power, as men, as students, as football and basketball players, understanding that their voice and their presence matters. I am trying to engage them and inspire them to get active. That’s what I try to do everywhere I go.

What has surprised you about sharing this campaign across the country?

One of the biggest lessons I’ve learned is that people want change. I really do believe that. Our young men want to get involved. They just haven’t really been invited to the discussion. A lot of times young men feel talked at and told what not to do. “Stop raping,””stop this,” “you’re the problem.” But nobody’s really come to them and said, “you are also the solution. Let’s work together.”

A lot of guys think, why is this my problem? You have to get them to the point where they say “this is my problem, and this is why it is my problem.” If women could stop sexual violence, they would have already done it. If the 10 percent of men who are perpetrating these crimes aren’t going to stop it, who does that leave? The 90 percent.

We are reaching more of the 90 percent and helping them understand why this is their issue. This is what gives me the most hope.

What impact has sharing your personal story had on your campaign’s message?

My decision to be really honest and detailed about what has happened to me is probably why I’ve had success. If I say to you, “I was gang raped by four men for six hours,” I don’t know what that means to you. Most likely, if I just said that you would somehow sugarcoat it in your mind to make it comfortable to you, to deal with it. But if I tell you exactly what happened to me that night, in very graphic detail, you can’t escape it and you can’t sugarcoat it. You have to see me as the victim that I am. And as I go on with my story, you also have to see me as a survivor. Hopefully that translates into seeing other survivors. For me, I need you to be uncomfortable because this is uncomfortable. It’s uncomfortable for me and it’s uncomfortable for every survivor.

It’s only when we’re uncomfortable and mad that we are called to action. I have to upset you. And I intentionally try to get you to squirm in your seat. I try to make you cry. I want you to be uncomfortable with my story because then you’ll want to get involved and to be part of a solution.

What message do you have for fellow survivors of sexual assault?

I always say to them: I believe you. It’s not your fault. You did nothing wrong. Getting rid of the blame and the shame is probably the most important thing that you can do. I have asked myself: Why did I drink? Why did I go there? Why didn’t I make sure my boyfriend was with me? Why didn’t I choose a better friend? By doing this, I am taking the weight of the accountability off the perpetrator and putting it on myself, which is what most survivors do. Society blames us too. Victim blaming is a huge problem.

It’s been a really invaluable little exercise that I use for myself and have taught other survivors to do because it’s a conscious way to retrain our brain and push back on our negative inner dialogue. The exercise is also for people trying to combat victim blaming in society, which can be very difficult. It’s an easy way to shut down that conversation—and it can be very empowering.

How do you feel about participating in the Words to Action town hall at SJSU?

When I came forward with my story three years ago, I had no idea that I would be doing this work. All of this kind of happened by accident. Getting to sit down with Nancy Hogshead-Makar and have this conversation at San Jose State, where there are all these amazing people, is a real honor and a privilege for me.

There are so many survivors and I don’t see a lot of us. Representation matters. My hope is that through my work and by participating in this event I can help to create space for more voices of all different races, religions, ages and backgrounds. Sexual violence does not discriminate. Anyone can be a victim. I really am grateful to participate in the town hall because these types of events are going to inspire more events and more survivors to be able to have a place to use their voices to create change.