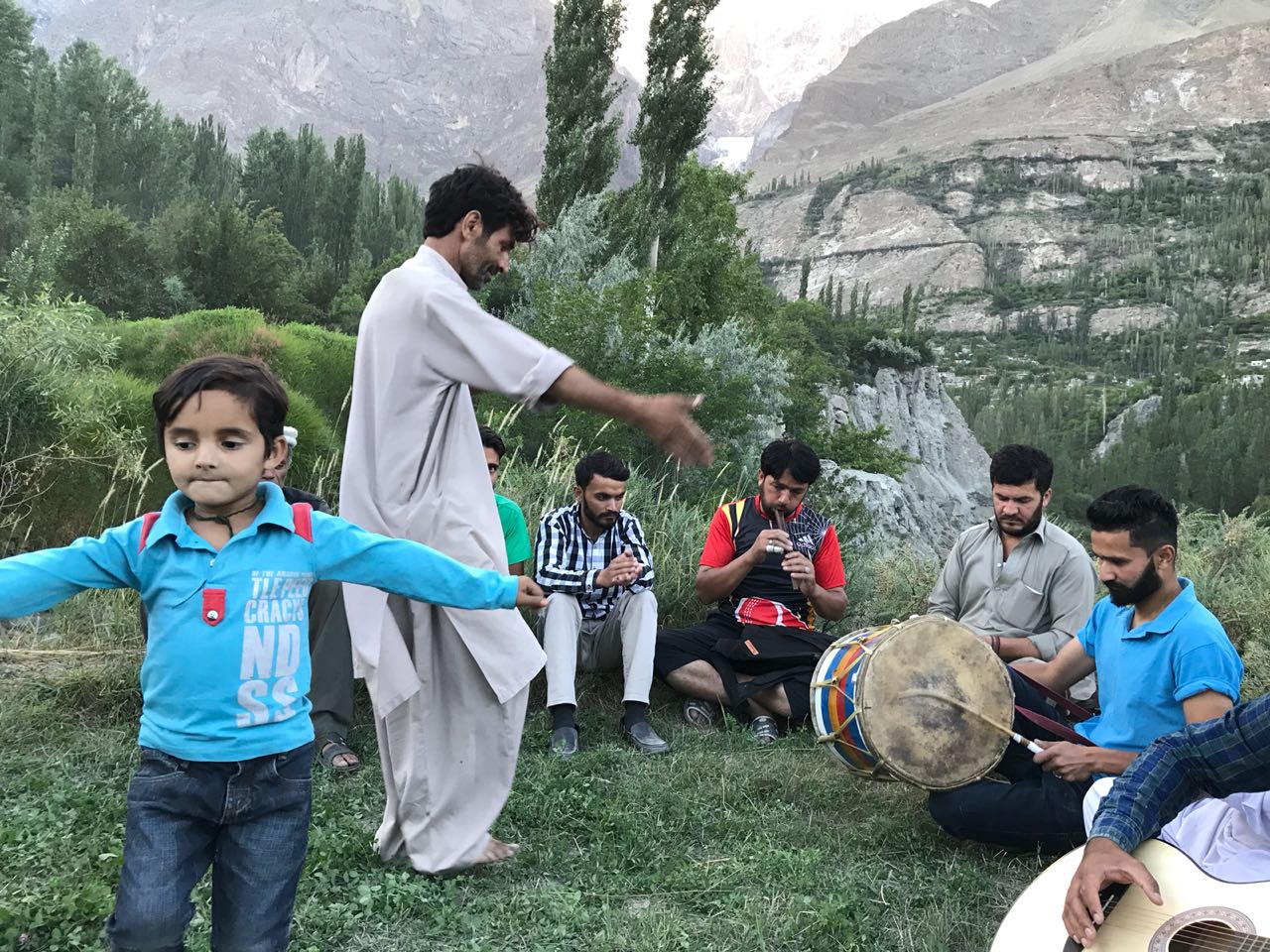 The Dawoodi people live in two villages, both named Mominabad, in the remote Hunza and Nagar valleys in Pakistan’s Gilgit-Baltistan Province. This province lies in the Karakoram mountain range, which runs along the border of Pakistan, India, China and Afghanistan.

Their ancestors migrated there from current-day India several centuries ago to serve as blacksmiths and musicians to the local rulers (Lorimer 1939:7, Schmid 2007:107-110, Weinreich 2010), part of the same diaspora that sent the Roma to Europe and the Domari to the Middle East. Although these occupations were valued, the people themselves were considered to be of low caste, and their lives were restricted in many ways. In fact, until the 1970s the Dawoodi were generally forbidden to perform any other job or live outside their traditional villages (Schmid 2007:112, Weinreich 2010). Given this situation, the men naturally became fluent in other local languages, a trend that has grown over the decades. Today, there are no monolingual Dawoodi speakers in the two villages – all members of the community, men and women alike, now speak Shina and/or Burushaski as well as Urdu, and only the oldest generation speaks Dawoodi on a regular basis. (Backstrom 1992:104, Weinreich 2015). They also work in a variety of modern occupations, and most families do some farming as well (Schmid 2007:113).

No systematic survey of language use has been done in the community. Some published estimates list 500 Dawoodi (Backstrom 1992, Kreutzmann 2005), but they appear to focus on ethnicity rather than actual speakers, and many live outside the two traditional villages. Observations made in 2002 and 2004 (Rahman 2003, Weinreich 2008), estimate that there are only 40 speakers of the Nagar dialect, and approximately 300 of the Hunza dialect. The majority are elderly; and children are no longer taught the language (Schmid 2007:116, Weinreich 2015). Based on these data, UNESCO classifies the language as severely endangered (Moseley 2010), while Ethnologue rates it as moribund (Lewis et al. 2016). Based on this project’s two field visits in 2017 and 2018, we estimate that there are only four or five dozen speakers of the Hunza dialect, and roughly a dozen speakers of the Nagar dialect. We have found no speaker under the age of twenty; most are middle-aged and older. Speakers are well aware of the decline of their language, and many see the loss as an inevitable cost of assimilation and advancement in wider society (Weinreich 2010). Nevertheless, the community has shown great enthusiasm for our project to document Dawoodi and generously gave of their time and knowledge.

Given this history, the community considers the old outsider terms for their language – Domaaki, Dumaki, etc. – pejorative. Speakers tend to identify themselves by their clans rather than by ethnicity, and until recently there was no unified term for the language. The community asked our team to use the name Dawoodi, a request we have honored throughout.

Kreutzmann, Hermann. 2005. Linguistic diversity in space and time: A survey in the Eastern Hindukush and Karakorum. Himalayan Linguistics 4.1-24.

Lorimer, D.L.R. 1939. The Ḍūmaki Language: Outlines of the Speech of the Ḍoma, or Bērīcho, of Hunza. Nijmegen: Dekker & van Vegt N.V.

Weinreich, Matthias. 2010. Language shift in Northern Pakistan: The case of Domaaki and Pashto. Iran and the Caucasus 14.43-56.

Weinreich, Matthias. 2015. Not only in the Caucasus: Ethno-linguistic diversity on the roof of the world. Studies on Iran and the Caucasus: In honor of Garnik Asatrian, ed. by Uwe Bläsing, Victoria Arakelova and Matthias Weinreich, 303-341. Leiden: Brill Publishers.