The Natalie and James Thompson Art Gallery is pleased to present the work of interdisciplinary artist and educator Kamau Amu Patton in a solo exhibition that will open on October 18, on display through December 9, 2022. 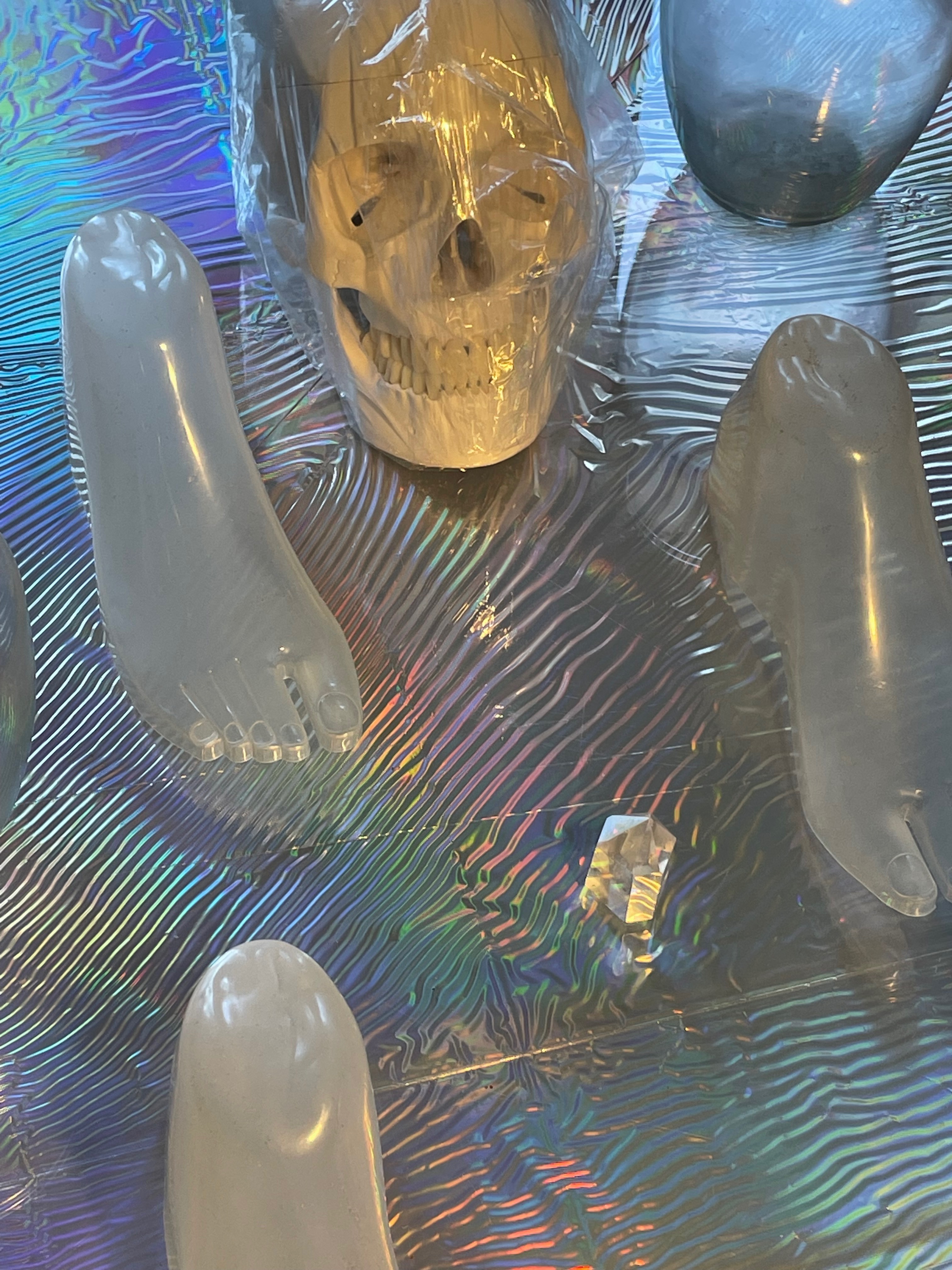 TOMBS presents two recent bodies of work that imagine an archeology of a distant future,  one that occurs post climate catastrophe and after the deterioration of history and written archive. As underground remains of past civilizations continue to be explored by archaeologists, scientists and scholars, Patton looks beyond to consider how our own culture of collecting and the attendant waste, pollution and ammassing of plastics is coming to mark the landscape, to create a new set of accumulations- ones defined by cheap mass produced objects, E-waste, trash and obsolescence.

TOMBS takes place in a near future, a future overwhelmed with landfills and plastic islands. As with discoveries from antiquity, these future archeologies reveal objects that circulate meaning and history, raising fundamental questions for the viewer: How does time read through certain objects? What is our relationship to a sense of time?

In Glass_White, Patton excavates his own future archive, with a series of fifty three images of objects photographed from various angles and scaled in and out. Patton’s stagings are interspersed with personal objects, found materials, thrift stores and dollar stores purchases, and objects from his family home. What is fit to archive or preserve? What is precious and what is waste? Glass_White does not answer these questions. Instead, through the repetitions and at times broken syntaxes of the series, Patton concerns himself with a metaphysics of objecthood, allowing mundane things to create spaces that are mysterious and strange, revealing aspects of Egyptology, Rosicrucianism, and the extraterrestrial. This archeology is both tethered to a family and a site, and evidence of life during the peak of capitalist production, when plastics, gels and other non-biodegradable materials suffused the planet and inadvertently became the bearers and markers of history, knowledge, and culture. 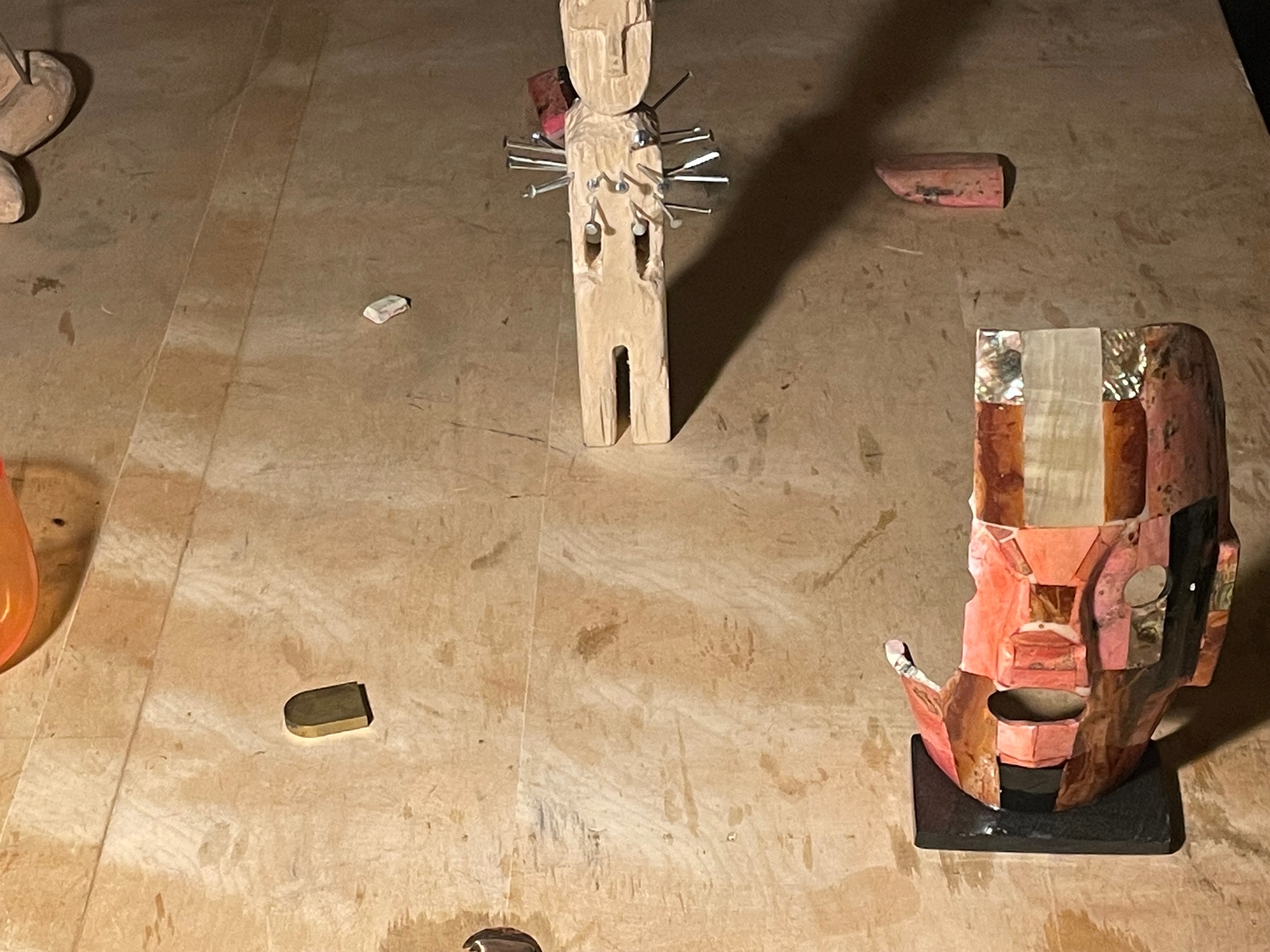 In Red Earth, Patton further explores and complicates the concept of a time capsule, presenting among other things, a mask, a figurine, a goblet arranged on a wooden surface. These objects are totems, sacred relics, found items, and commercially produced trinkets: a statuette made for tourists to purchase as a keepsake, a dollar store llama toy, a mass produced mask coated in polyurethane. The ground they occupy is indiscernible, perhaps toxic. Is it a trace of the past, an image of a future that is uncertain, or a vision of an afterlife that is likely uninhabitable?

TOMBS is an archive of a failed future: one in which climate change and accumulation have left only the hardiest and most unnatural of materials. Yet it is also an exploration of the ecological impact of cycles of manufacturing, construction, habitation and destruction. The impulse to  gather, to collect, and bury objects is one that has created an archive of human presence on the earth, an underground geography of sites to be excavated in the afterlife, after the end of the world.

In conjunction with the opening of the exhibition, Kamau Amu Patton will present an illustrated lecture 5:00pm - 6:00pm the evening of October 18, 2022, just prior to the opening reception, 6:00pm-7:30pm.