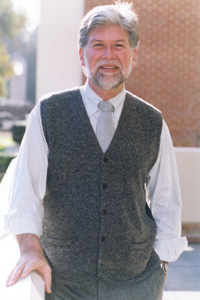 BACKGROUND:
Terry Christensen specialized in state and local politics. He earned a BA in political science from Stanford and a PhD from the University of North Carolina at Chapel Hill. The author or co-author of nine books, his most recent publication is the 15thedition of California Politics and Government, the best-selling text on California politics he co-authored with Larry Gerston. Other books include Movers and Shakers (a 1982 study of political power in San Jose and other Sunbelt cities), co-authored by Phil Trounstine; Local Politics: A Practical Guide to Governing at the Grassroots; Projecting Politics: Political Messages in American Films, co-authored by Elizabeth and Peter Haas; and Recall! California's Political Earthquake, also co-authored by Larry Gerston.

Christensen chaired the Department of Political Science from 1994 to 2002. During that time he helped raise funds for multiple department scholarships and founded the Don Edwards Lecture series and the Institute for Public Affairs and Civic Engagement (IPACE). In 1998, he was named San José State University's Outstanding Professor. His teaching focused on local government and politics; he also directed the SJSU political science department's internship program, which he created over forty years ago. Generations of community leaders and activists have graduated from his classes to serve in elected and administrative positions and as volunteers.

Local and national media regularly call on Christensen for analysis of politics in California and Silicon Valley. He has served on numerous civic committees and commissions, often with his former students, and as an advisor to many candidates and elected officials.

He was the the Founding Executive Director of CommUniverCity San Jose (www.cucsj.org), a partnership between the City of San Jose, San José State University and the neighborhoods surrounding the university that concentrates hundreds of students performing community service in these neighborhoods with projects selected by residents and supported by the city. He is still involved with two CommUniverCity projects initiated while he was Executive Director:  Friends of Five Wounds Trail (www.fivewoundstrail.org) and BART Alum Rock Transit Village Advocates (BARTVA)( http://five-wounds.equoria.org/bartva/).

Since 2015 he has hosted Valley Politics, a monthly TV show focusing on politics and public policy in San Jose and Silicon Valley produced by CreaTV.  Valley Politics airs Wednesdays at 8 p.m. on Comcast Ch. 30. You can also find it on Facebook or view episodes on YouTube at http://www.youtube.com/user/CREATVSANJOSE