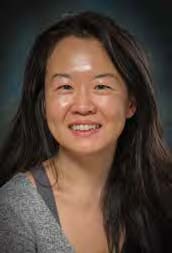 I am currently working on two projects. The first project focuses on how Asian American women cope with racism and the impact of their shifting behaviors on well-being. My colleagues and I recently had gotten our manuscript on shifting among Asian-American women accepted in the Asian American Journal of Psychology. Thus, we are following up this project with a study on how shifting relates to race-related racism and stress.  Our findings indicate that among this group of women, greater levels of ethnic identification produced more shifting (i.e., changing one’s behavior in the presence of mainstream Americans), which in turn, resulted in more racism-related stress. In other words, these results suggest that Asian American women may rely on shifting as a coping mechanism to fit into mainstream American culture, but this comes at a cost to their well-being. The second project is a follow up on one of my previous projects on physical attractiveness (published with student co-authors in Personal Relationships), I am working with a number of my student research assistants on the factors contributing to waist-to-hip-ratio (WHR) in order to determine its biological versus contextual predictors. Using both archival data from popular press publications (e.g., magazines) and a sample of SJSU undergraduates, we are testing whether lifestyle choices (e.g., diet, exercise) actually exerts an impact on this evolutionarily relevant mating cue.

My work on shifting among Asian American women illuminates our current understanding of multicultural mental health issues and contributes to the notion of intersectionality. In the context of mental health, it’s well-established that POC can experience racism-related stress when their ethnic/racial identity is not considered. This work further suggests that efforts to shift their own behaviors may actually contribute to this racism-related stress, particularly when ethnic identification is strong. The focus on Asian American women in particular furthers intersectionality theory by highlighting the interactive ways in which cultural variables—like race and gender—intersect. Moreover, our findings on Asian American women are consistent with recent work on shifting and racism-related stress among Black women. Recent events have highlighted the ways in which BIPOC individuals are routinely exposed to flagrantly stressful and discriminatory events in their everyday lives, and this line of research may help in elucidating how these racism-related stresses impact the mental health of racial minorities.

As a first-generation Asian American woman myself, I am well-situated to study bicultural individuals who identify the same way I do and examine the forces that shape how they behave across cultural context and the implications of such behavior. Beyond my own personal experience, I am inspired by evolutionary psychology’s approaches to understanding behavior. Since its inception, much of cultural psychology has focused on explaining the question of “what”—i.e., what cultural differences exist across the globe. Only in recent years has the rise of evolutionary psychology, social neuroscience, and the like provoked more serious questioning of the “why”—i.e., why do cultures differ in some ways, and not others? This line of questioning has inspired my current project on waist-to-hip ratios (WHR), since the science of physical attractiveness is largely embedded on the idea that what people find universally attractive across cultures are cues to fertility and therefore serve evolutionary purposes. If so, then individual efforts or cultural practices should do little to shift these long-standing adaptive cues. Also, whenever I’ve taught on this topic, at least one student will ask (in response to the discussion of ideal WHR): well, can’t a woman just go to the gym? I suspect the answer is not that simple.

I’m proficient in writing in Spanish and would be able to respond to written interviews in that language.