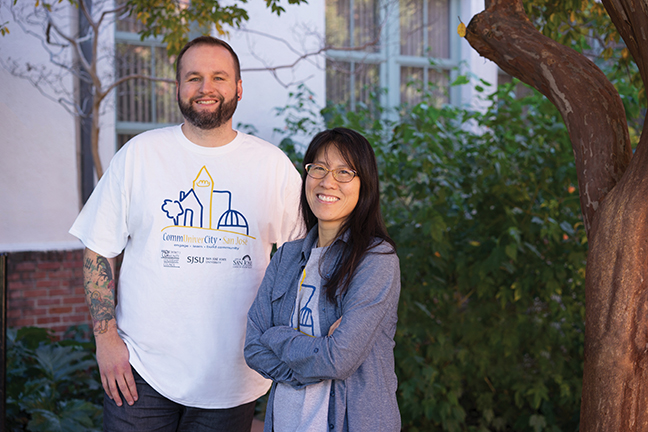 An unsightly problem is on the rise in San José, afflicting many neighborhoods across the city: illegal dumping. In response to this growing issue, two research projects brought together several groups, including SJSU faculty and students, local residents, business owners and the City of San José.

The projects were developed under the umbrella of CommUniverCity San José, an innovative partnership between SJSU, the City of San José, and downtown neighborhoods. Each year, CommUniverCity spearheads forty to fifty neighborhood-based projects, helping build capacity for residents living in primarily immigrant, low-income communities to engage with their local and regional government.

The first project, directed by Sociology Lecturer Jason DeHaan, focused on community outreach. Students on the research team knocked on doors, attended neighborhood association meetings and other events, and distributed educational materials. These materials, provided in English, Spanish and Vietnamese, included information on how to get support for large item disposal and how to report illegal dumping.

A second project, led by DeHaan and Katherine Cushing, SJSU Professor of Environmental Studies, researched the effectiveness of a program designed to help and support local businesses. Students developed, conducted, and analyzed surveys, revealing the extent and the expense of the illegal dumping problem.

Cushing credits CommUniverCity and its bridge-building role as being central to bringing different groups together to combat illegal dumping. “The partnership between the city, the community, and the university is an incredibly important one,” she says. “It connects people and institutions, allowing us to share resources and data in ways that wouldn’t be possible if we were working on our own.”