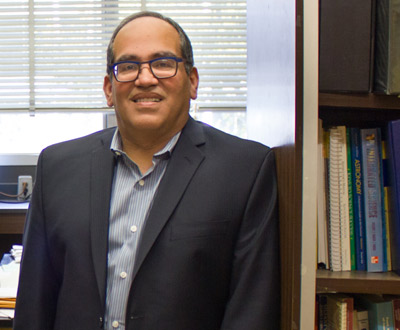 Principal Investigator Julio Soto, along with Co-PIs Miri VanHoven and Rachael French, has been awarded a grant of more than  $375,000 by the National Science Foundation (NSF). The three-year Research for Undergraduates Using Molecular Science Applications (RUMBA) grant will fund 31 research positions for underrepresented minority and female undergraduates  at SJSU in an effort to increase the overall number of underrepresented students doing biological research in Silicon Valley.

Dr. Soto was the first RUMBA PI on campus and has been leading the program since it was first funded by NSF in 2008. His enthusiasm for RUMBA is both professional and personal.

“As a Latino scientist, I understand the importance of becoming not only a role model, but also a mentor of undergraduates with similar backgrounds ­- underrepresented in the sciences, first generation, and of low socioeconomic status,” he explains.

Dr. Soto’s work as a RUMBA mentor and PI resulted in his being awarded the 2013 Presidential Award for Science, Mathematics, and Engineering Mentoring (PAESMEM). In receiving the award, he met with President Obama in the Oval Office in 2015.